A journey through the history of horror movies, its soundtracks and influences. 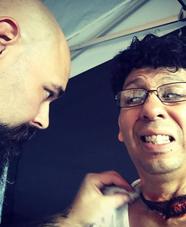 As proprietor of Scriptproof for eight years, Keil Troisi has edited and enhanced over 600 screenplays from big-time studio writers, undiscovered first-timers, and everything in between. Those experiences, combined with writing and directing his first feature ("Human Resources" playing at Macabre Faire), make him uniquely qualified to share his insights about what to do and what not to do in writing a genre screenplay. One part presentation and one part speed pitch feedback session, this talk will impart practical, stylistic, and conceptual lessons about crafting a low-budget yet high-concept screenplay that will see the light of day.

- History of fashion and your costume accuracy.
- Fashion past to create fashion future (Sci-Fi and Fantasy).
- Drawing designs and how to use a croquis figure.
- Costumes on a budget and where to find them.

This will be a comedy roast for celebrity guest Edward X Young. There are no restrictions and roasters have already been chosen. Be warned! If you embarrass easily for others then this is not the event for you. If you love a good laugh at the expense of someone else then by all means… ATTEND. 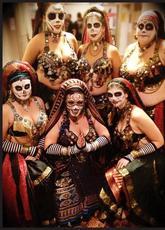 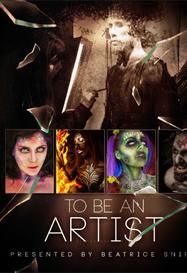 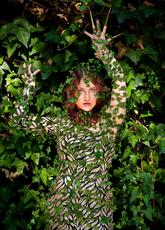 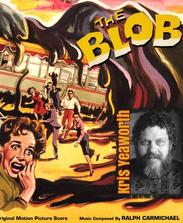 Behind the scenes of being a professional artist in the field. What does it take to be in the film industry? 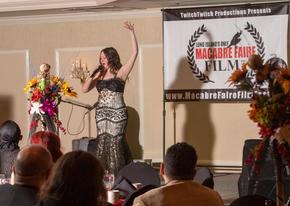 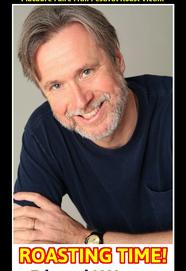 A moderated panel with Eileen Dietz, Jodi Draigie, Christina Raia and others.

This panel will explore the "must haves" to be a good cinematic villain. Each participant will get their chance to show what they've got performing a short “bad guy” monologue as we search for the ultimate Villain in the class.     Presented by celebrity guest: Jasson Finney 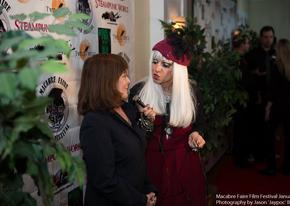 Join Robert L. Brodmerkel, (Formally known as web critic Horror Bob of Horrorreview.com.) for a discussion and some insight about how to get your film reviewed by horror websites. Join Robert as he gives you insight into a web critic’s mind. He will discuss how he used to select which independent films he would cover for the site. How to catch the eye of a web critic, and the professional ways to use both a positive and negative review to get your film noticed.

Performances During the Red Carpet Gala Evening on Saturday, Jan 16.

Tickets to this gala MUST be purchased in advance by  Friday, Jan. 8  due to assigned seating and formal attire is required. 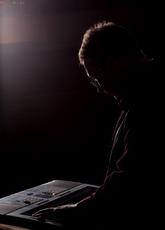 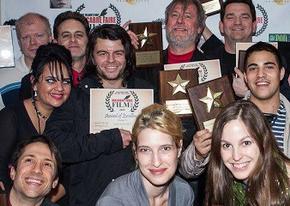 Your sensual schizophrenic and divine obscurity. Her style includes the combination of neo and classic burlesque, with a severe twist. Safe to say, she’s tragically beautiful. She pays great homage to Venetian and pop culture, in her character and music.

​Thursday - Board Room - 7:00pm – Festival Submissions – Are You Doing It Right?

Filmmakers say they’re upset with festivals and the submission process. However, have you stopped to check and make sure you’re doing your part to make it a success for yourself? This is what is looked for at the Macabre Faire Film Festival from the start.

The Grave Gear Orchestra is a collection of musicians and performers performing the more macabre side of music and entertainment. 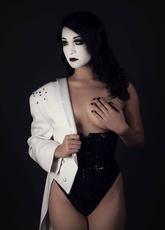 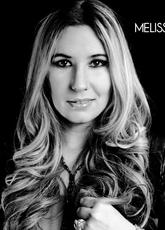 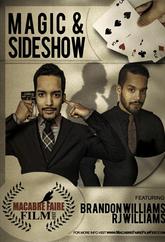 Method acting is both a fun but sometimes dangerous way of acting for certain people. In this panel you will hear about some real life instances of how certain actors were affected after playing a certain character. The audience will also get to participate in some acting exercises.    Presented by actor: Dennis Carter 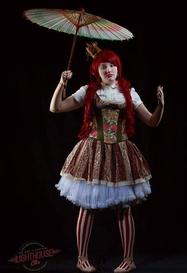 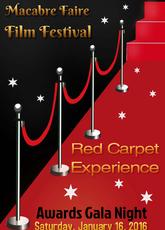 Bringing some Ragtime Post-Punk to the Red Carpet. 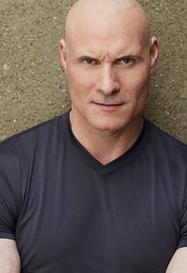 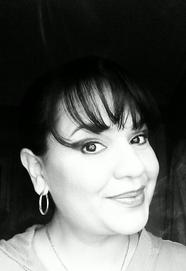 Les is an extremely likable comic with a very energetic and clean act. Audiences of all ages enjoy his take on the challenges of middle age, marriage, parenting and his zany views of the world around him. Les is also an actor and a singer. He performs Classic Standards and Broadway Show Tunes with his singing trio Two Guys and a Gal. 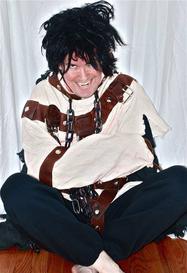 ​This is a separate ticketed event that will include dinner, entertainment and the Awards Ceremony. Interviews and photos will take place on the Red Carpet starting at 5:00pm through 7:00pm in front of the Main Ballroom. Afterwards, everyone will proceed into the Ballroom to their assigned seat for dinner. This portion of the event will go from 7:30pm until 12:00am as we proceed with the awards and Variety style show. Formal Attire is a MUST for this Gala Night. 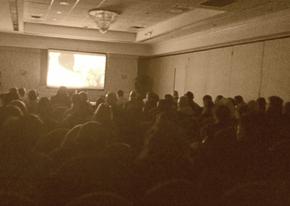 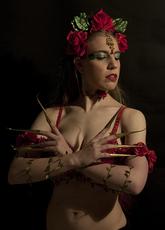 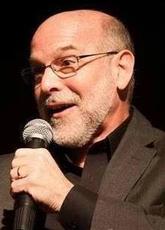 Recording artist Melissa Otero is an award winning singer/songwriter living in New York City making her dreams come true! On January 1st, 2013, her single Angels and Demons was featured on Lifetime TV's Dance Moms as well as the video game Rock Band, catapulting it into a national success with thousands of digital downloads to her name!

A producer, singer, songwriter, and performer of unique EDM music she

darkness and theatricality, but never without a sense of humor.

Filmmakers say they’re upset with festivals and the submission process. However, have you stopped to check and make sure you’re doing your part to make it a success for yourself? This is what is looked for at the Macabre Faire Film Festival from the start.

Audiences are riveted by Adam’s mastery of his own fate as he showcases these death-defying acts, but most important, they laugh. It is Adam’s masterful blend of humor and tension that is so appealing.

Experience the beauty, culture and arts of the Mysterious East. 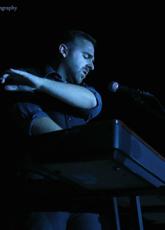 Sunday - Southfork Room - 4:30pm - From the Shelf to the Screen:Book Adaptations in Horror
​
A discussing film adaptations from authors such as Shirley Jackson, Stephen King, and Edgar Allan Poe with author: Nancy Scuri. 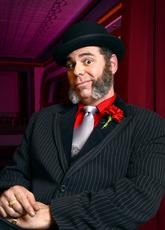 Twin Brothers, Brandon & Robert J. Williams, plan to blow your minds with their Magic & Sideshow during the

​Sit in on this demo presentation and learn about the the process of creating a 3d prosthetic transfer, examine examples of different materials used and witness the sculpt to mold to application process with Special FX artist Steven Siegelbaum.

All the Extras at the Macabre Faire Film Festival 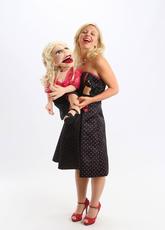 - History of fashion and your costume accuracy.
- Fashion past to create fashion future (Sci-Fi and Fantasy).
- Drawing designs and how to use a croquis figure.
- Costumes on a budget and where to find them.

Friday - Board Room - 8:30pm - Tone and Storytelling: Why Horror Films are Comedies

This panel delves into the nature of "tone," a term often used but seldom explained or elaborated upon in screenwriting  "how-to" books. “Tone” is the projection (towards the audience) of the writer’s attitude, manner, tastes, philosophy and moral view in her work. Tone may range from the profoundly tragic to the broadly comic, with infinite nuance possible in between those extremes.  For filmmakers and writers, the deft handling of tone can make the difference between holding and losing an audience. This presentation generates lively debate about the nature of storytelling, and what differentiates drama, romanticism, thriller, horror, and comedic voice.         Presented by filmmaker: David W. Warfield “Rows” 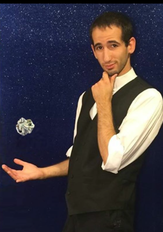 Calixta Starr is an award winning theatrical fusion dance artist from New York.  Her macabre storytelling style has been featured in numerous stage shows, such as the Danse Macabre in Montreal, as well as dance festivals and pop culture conventions.  Calixta Starr's training in multiple dance styles, costume and make up design blend together to create pieces that are wholly unique and inventive.  Her artistic style continues to push the boundaries of contemporary performance art.